Read "Portrait of a Man"
I took this course in the winter quarter of 2012 as a freshman with Professor Jim Knippling. He structured it in such a way that the three smaller essays were intended to teach analysis and synthesis so that we would ultimately be able to write a ten-page research essay on a topic of our choosing. The first three essays were all analyses of various types of media. The first was an image analysis, the second was a dramatic analysis, and the third was a song analysis. Using such different texts as sources for our analysis really helped me learn better because it gave many different perspectives to view many types of pieces--it didn't just teach a single strategy to interpret one kind of source. With the image, we looked at lighting, color, lines, framing, etc. With the play analysis, we looked at themes, symbols, and irony, to name a few. Finally, with the song analysis, we looked at structure, musical elements, and historical context. In the end, these skills helped us write a research essay. We looked through many sources, analyzed them, synthesized, and came up with a conclusion that served as our thesis. This course was beneficial to me for my future coursework because knowing how to analyze and synthesize data is a necessary tool in the field of engineering. The class also taught me how to write better, and therefore, communicate more effectively, another important tool.

Portrait of a Man - Image Analysis

The assignment was to analyze an image of our choosing. Some people chose advertisements, other people chose iconic photographs, but I decided on this artistic piece. I really like what I ended up writing because I loved the photo so much, and I think that comes through in the essay. What really impressed me was the depth, emotion, and character it captured with just a simple black-and-white, still image. It taught me a lot about analysis, because I had to look at many different aspects of the photo, such as color, lines, framing, lighting, etc. and interpret what those elements added to the overall message of the image.

The assignment for this essay required us to analyze one of three plays that we had read for class. I chose Trifles because I really appreciated its subtle complexities hidden within the relatively simple plot line. I like this essay because I believe I managed to find and explain a lot of the subtleties that add such significance to the piece.

For this assignment, we were asked to analyze a popular song of our choosing and write about why we thought it became so popular. I chose to write about the Queen classic: Bohemian Rhapsody. It appealed to me because it's such a crazy song and I wanted to try and make some sense of it. I primarily focused on the musical elements: structure, lyrics, influences, etc. Again, this is a great example of learning the process of analysis and synthesis because I had to break down the song in order to come to an overall conclusion.

The entire course culminated in this one extended research essay. We had to use the analysis and synthesis skills we had learned with the previous essays and put them to use in this final essay. We could write about any topic of our choosing, and I decided to explore the topic of bilingualism. It was interesting to me because I myself am bilingual (I have spoken Italian my whole life and learned French through school) and I wanted to understand what inherent differences there are between the brain of a monolingual and the brain of someone who has spoken two languages from birth, like myself. My research was very interesting and it led to me to the conclusion that the American school system is going about language instruction in the worst possible way. I like this piece because I did a lot of research that I found quite interesting and I think the thesis is a compelling argument. 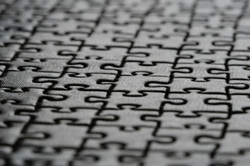 I chose this picture to represent my experience because the entire process of synthesis and analysis is sort of like putting a puzzle together. You need to carefully break something down into pieces and then find where they all fit in your thesis. The analogy isn't perfect, however, because with synthesis, you end up with a new puzzle.