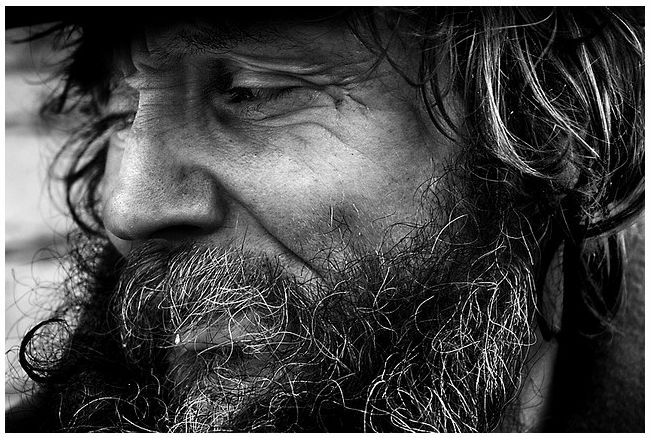 Memories Sitting alone on a little place surrounded by cars traffic. Self-isolation. Waiting for nothing. He talked to me for about an hour. Of a lost life. An ordinary life like mine, like many others. And now...
Irini Sfyris

23 Jan 2012
Portrait of a Man
A black-and-white photograph of a haggard-looking man. His eyes look away, giving you the sense that he does this out of shame, or maybe something else? His grisly beard and long, unkempt hair hint at a life of poverty. He might be homeless, but you can’t say for sure.

The old adage “a picture is worth a thousand words” comes to mind when you look at him. The character captured in this image has a story to tell, and it’s expressed through every line and detail on this weary man’s face. His beard is untrimmed, wiry, and chaotic. His eyes are wrinkled and tired, but clear. His brow is furrowed. He looks worried, almost as if he’s crying. He spoke “of a lost life… And now…” (Simeon).  The caption indicates that the man is rendered speechless by the significant hardships he has suffered. The title, “Memories,” just adds to this feeling of loss, since memories are just a reflection of something from the past, something lost. Through his deep eyes, he can see the memories of the life he once had and the man he used to be.

The intense close-up used by the photographer removes the setting and context of the image, and along with it, any perception or prejudice you might have.  Because homelessness and poverty tend to carry with them a stigma, to many they’re the object of disgust and disdain, while to others, pity, but not usually empathy. People just see the filth and helplessness and try to move on before they’re too disturbed. By bringing the man’s face so close to the viewers, the photograph doesn’t give you any choice but to look and understand the man’s humanity. It’s a very personal shot, and the lack of distance creates a sort of intimacy between yourself and the man.

The photographer tries to establish this idea of parity through the angle at which he captured the image. Ramage, Bean, and Johnson explain in their textbook that “[a] level angle implies equality… [and] front views tend to emphasize the persons in the image” (248). The photographer not only wants to make sure you’re focused on the man in the image, but wants you to understand that you and this man are no different from one another, which echoes the words of the caption as the photographer himself says the man had  “an ordinary life like mine, like many others” (Simeon). He wants you to recognize that loss is a universal experience. It may not be as severe as in the case of this man, but everyone carries it with them at some point in their life. The photographer is setting it up so that you empathize with this man and, in effect, elevate him to a status equal with yourself.

The photographer also uses color, or more specifically the lack of it, to better convey his intentions. Because the image is in black and white, there are no distracting colors to turn your attention away. The harsh black-and-white contrast throughout the man’s beard and greasy hair speak to the harsh life this man lives. The messy, untrimmed hair all over his head is a symbol of his condition and the fact that it’s in such bright whites and dark black reflect that it brings judgment upon him without much thought. The expression that “life is not black and white” is reflected here. Prejudice is inherently black-and-white, but the issues that cause it are more complicated than that. The face itself suggests this, with its gray tones implying that the complexities lie there—in the signs of his humanity. The bright highlights on his cheekbone and nose draw attention once more to the man’s eyes, the “windows to the soul.”

The lines in this photograph all direct your eyes to those of this man, which the photographer wants you to understand is the focal point of his image. The beard is wild, with lines going in every direction very haphazardly. The hairs are sharp, grainy, and disjointed, creating a feeling of agitation (Ramage, Bean, and Johnson 248). Even the lines of the hair on his head, though slightly smoother, give this impression, as they’re also disjointed and don’t really point towards one direction. The lines on his face, however, are softer and calmer, perhaps to soften your views on this man. The wrinkles in his face lead you directly towards his eyes. The crow’s feet and laugh lines bring your gaze in from two sides of the photograph. The dark line of the coat around his shoulders in contrast with the bright empty space also leads you towards his face, and once again, his eyes.

Though it seems like a simple picture of a man, the photographer artfully created a deeply emotional image. Even at first glance, you are unconsciously aware of the complexity of the photo. His pensive eyes speak as clearly as words, and the photographer made sure his message was heard. Through his choice of color, lighting, and framing, he conveys the central idea of humanity through this nameless man’s eyes. Even though the photo fits better in the genre of art rather than documentary, the intent is still to chip away at your prejudice and leave you with a sense of kinship with the man. In the end, it’s a beautifully composed image with great strength in its subtlety, and you can’t help but feel a change in your perspective.
Works Cited
Ramage, John D., John C. Bean, and June Johnson. "Analyzing Images." The Allyn & Bacon Guide to Writing. Boston, MA: Longman, 2012. Print.